There are four valves in the heart, which have different positions, structures and functions.

There are a number of problems that can affect the valves including:

Symptoms of valve problems may include:

The aortic valve is the most common of the heart valves to develop problems. This valve controls the flow of blood out of the heart and to the body.

If the aortic valve becomes narrowed and does not allow blood to leave the heart to supply the body, the body and brain are starved of oxygen.  The heart therefore grows thicker and stronger to try and force more blood out, but this then means that the extra muscle bulk of the heart needs a bigger blood  supply… which means that more blood needs to be ejected out of the aortic valve, making a vicious circle.

Symptoms of aortic stenosis include:

Very often, however, even if the aortic valve is severely narrowed, there may be no symptoms whatsoever. In such cases, it’s important to discuss with your surgeon whether surgery should be offered - in some cases, it may be better to monitor the valve.

Symptoms of aortic regurgitation include:

The mitral valve is the second most commonly affected heart valve. This valve sits between the atrium and the ventricle on the left hand side and is subjected to the highest pressures of any of the valves in the body as it has to keep closed when the muscular left ventricle is squeezing at its strongest. The mitral valve controls the blood flow from the priming chamber (atrium) to the pumping chamber (ventricle) on the left side.

The mitral valve is anatomically and functionally complex: it changes shape and geometry according to the timing of the heart beat. Three main components make up the mitral valve:

A good analogy for the function and anatomy of the mitral valve is a set of double doors. The leaflets are like the doors themselves, the annulus is like the doorframe and the subvalvar apparatus are like door restrictors.

According to which of these is affected, the treatments on the mitral valve can vary. 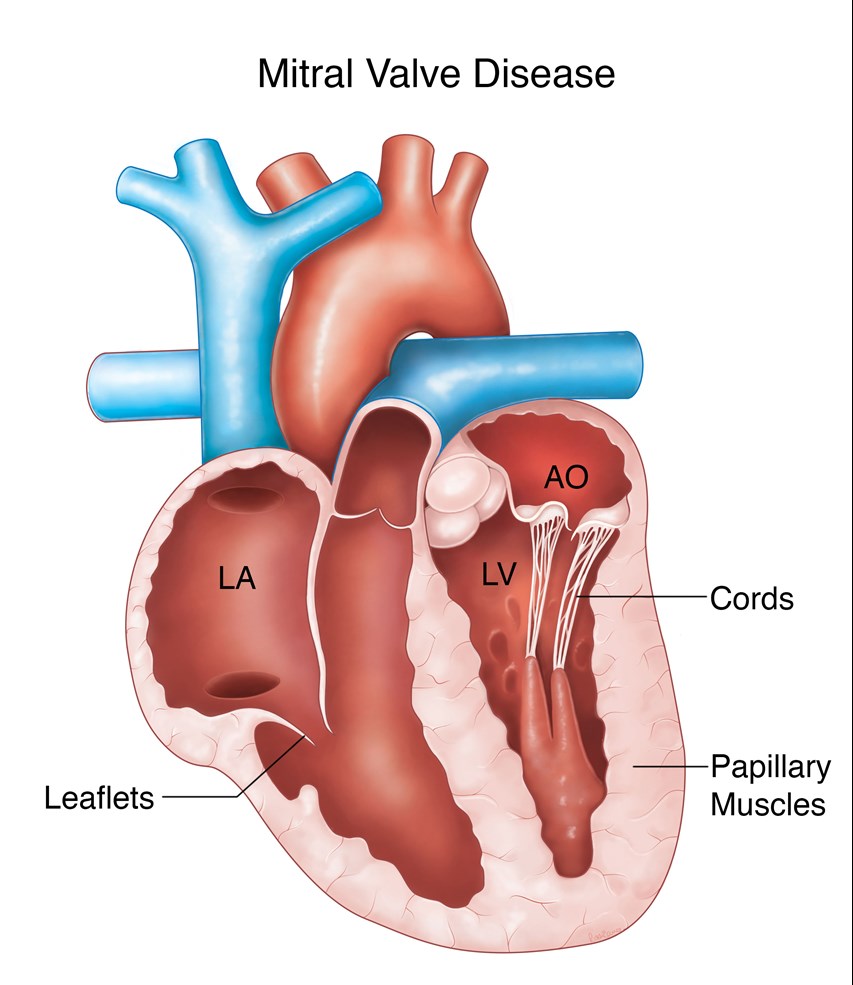 Mitral regurgitation is where the mitral valve does not close properly as the blood is being ejected out of the left ventricle and forwards to the body through the aorta. In this case, some of the blood leaks backwards to the left atrium and thereby into the lungs where it was coming from.

This can cause the atrium to swell up with excess blood (dilate) and also reduces the amount of blood that the heart is sending round to the body.

Frequently mitral regurgitation will have no symptoms, even if it is quite severe. In such cases, your surgeon or cardiologist will discuss with you the options for treatment which may include monitoring for any signs of worsening / new symptoms or prophylactic treatment to prevent future problems.

If the blood cannot pass through freely, as occurs in mitral stenosis, the heart does not fill adequately with each beat and can be less efficient. In addition, the amount of blood that accumulates in the atrium can cause it to swell up or dilate, which can cause irregular heartbeats or palpitations. In addition, the blood further backlogs into the lungs where it can cause raised blood pressure in the lungs (pulmonary hypertension), water accumulation and breathlessness. Mitral stenosis is most often caused by Rheumatic Fever which may have been caught and recovered from many years beforehand.

Rheumatic Fever is an inflammatory disease that occurs in a small number of patients after throat infections caused by a bacteria called streptococcus pyogenes. Now that understanding of and treatments for this are better understood, it is rare to develop Rheumatic Fever in the UK.

The tricuspid valve is not often diseased in isolation. It sits in a low-pressure system and is therefore able to tolerate changes to its environment usually fairly well. More often, the disease process that causes mitral valve disease causes increasing back-pressure on the lungs which in turn puts pressure on the right
ventricle and causes the tricuspid valve to start leaking.

Other causes of tricuspid valve disease are anything that interferes with the leaflets: this might include artificial pacemakers that pass through the valve in order to get to the ventricle; or infections that have been transmitted to the tricuspid valve from elsewhere in the body.

Symptoms of triscupid valve disease include:

Treatments for triscupid valve disease include medical management with water-tablets called diuretics which reduce the pressure on the heart or surgery.

The pulmonary valve is not often affected by disease in adults. Where there are problems, they are usually related to a long-standing childhood problem or an infection.