The Thoracic Aortic Aneurysm Service current service is the end result of the efforts and stewardship of a number of surgeons and anaesthetists over the last two decades including those currently in post as well as those retired or moved on:

In the early years the service amounted to a specialist interest and pioneering development of safe and sustainable anaesthetic and surgical techniques. With time a specialist clinic (Thoracic Aortic Aneurysm Clinic) evolved and a specialist hybrid theatre was commissioned. The hybrid theatre allows for combined procedures with stents and surgery.

Please follow link for a description of the state of the service in 2002.

In 2007 the service became more formally organised with specialisation of 3 surgeons within the department, led by Mr Rashid, who became responsible for performing all urgent and emergency aortic surgery as well as most of the elective activity. The service subsequently expanded to 5 surgeons formally employed to contribute to the Aortic Service, led by Mr Oo then Mr Kuduvalli and presently Mr Field. 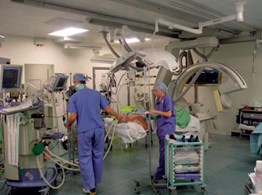 The team has now evolved into a mature service with depth and robustness that functions 365 days per year independent of any one individuals absence.

Clinical Leads for Aortic Surgery since formalisation in 2007