Of the four valves in the heart, the aortic, mitral and tricuspid are the most commonly affected. Treatment options depend on the valve affected, the disease affecting it and other factors that determine the most suitable approach.

The guides on the following pages are designed to give an idea of some of the techniques available.

Please consult with your own surgeon in order to discuss a specific case.

The aortic valve is the most commonly affected heart valve. In the UK, it is aortic stenosis that most frequently requires surgery as the valve tends to stiffen up with age. Surgery is needed for aortic valve disease if you have the following:

Aortic valve replacement is performed with the use of cardiopulmonary bypass and is normally undertaken through a median sternotomy. The operation has
been around for nearly sixty years and have improved substantially.

The old valve is taken out and a new artificial (also known as prosthetic) valve is stitched in place.

Different types of prosthetic valve exist which can be discussed with your surgeon.

Aortic valve repairs are less common procedures and suitable for people with leaking aortic valves but normal leaflets. These type of operations are performed by the aorto-vascular surgeons and details can be found on the aortic surgery pages.

Although the median sternotomy incision is normally very well tolerated (thousands of patients have this approach every year), surgeons have been looking for a way to make the incisions smaller and less invasive. Although the cut on the outside is smaller and the amount of breastbone that needs to be opened is reduced, the operation on the inside is exactly the same.

The best evidence on minimally invasive aortic valve replacement, published from a team of researchers at Liverpool Heart and Chest Hospital shows that
making the incision on the chest smaller gives the same excellent results as the standard procedure done through a bigger incision.

If you are interested in considering minimally invasive aortic valve replacement, the surgeons who offer this at LHCH are: 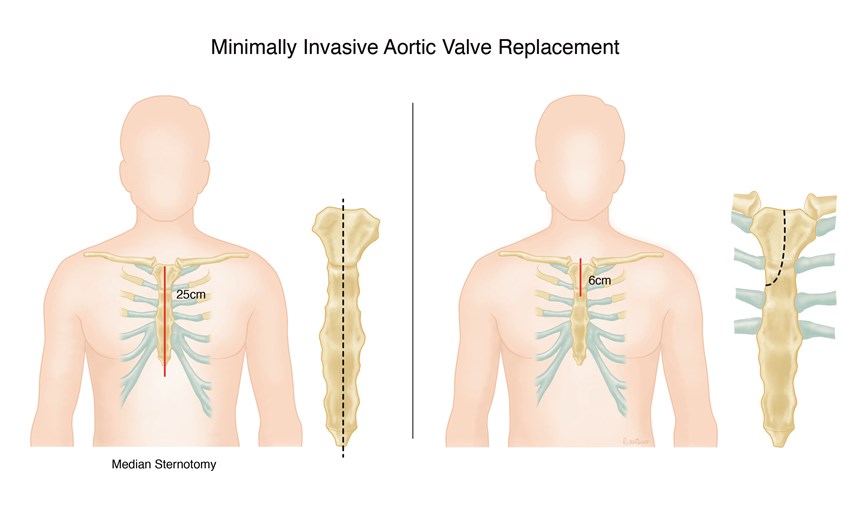 Aortic valve replacements have been performed as an open surgical for nearly sixty years. The risks and benefits of the operation are well understood and there are many valves that have been monitored over long periods of time demonstrating their effectiveness.

In the last ten years, efforts to make the procedure less invasive have employed new technologies such as collapsible valves that can be inserted without having to remove the old valve or stop and open the heart (i.e. without cardiopulmonary bypass).

At present, these procedures are only offered to patients who are unable to have conventional open surgery. To decide whether TAVI can be offered to a patient, they are usually discussed at a multidisciplinary team meeting where cardiologists, surgeons, imaging specialists and specialist nurses decide whether the procedure is suitable for the patient.

The mitral valve is the second most commonly affected heart valve. In the UK, it is mitral regurgitation that most frequently requires surgery. Surgery is needed for mitral valve disease if you have the following:

The mitral valve is a complex structure with multiple component parts that can be fixed using sutures and repair materials, but leaving the body of the valve leaflets in place to continue to do the job that they were designed to do. Most often this is only possible if the valve is leaking, not if it is stiff.

A mitral valve repair, preserving the body’s own tissues is a better, longer lasting solution compared to inserting a new artificial valve. Nonetheless, repairs can deteriorate over time. These procedures are best performed by surgeons who have been trained in mitral valve repair.

At LHCH, surgeons with a special interest in mitral valve repair are:

Mitral valve replacement is performed with the use of cardiopulmonary bypass and is normally undertaken through a median sternotomy. The old valve is taken out - either completely or partially - and a new artificial (also known as prosthetic) valve is stitched in place. Part of the valve may be left in so that the heart strings that help to retain the structure of the heart and prevent it from ballooning out over time are preserved.

Different types of prosthetic valve exist which can be discussed with your surgeon.

Patients with mitral valve disease can sometimes be offered a minimally invasive approach to the mitral and tricuspid valves. Rather than using the traditional median sternotomy incision through the front of the chest, in which the patient is put on cardiopulmonary bypass with pipes directly into the heart, minimally invasive surgery (sometimes called just mini-mitral) uses instruments passed between the ribs to access the heart. The cardiopulmonary bypass is achieved
using pipes that are placed into the groin, thereby reducing the number of medical devices that have to be passed through holes in the chest.

The most important part of minimally invasive surgery is getting the job on the heart done as safely and to as high a standard as would be achieved through a median sternotomy. The operation is therefore as safe as a conventional mitral repair or replacement operation but is better tolerated in terms of pain.

You may be able to have minimally invasive mitral / tricuspid / atrial fibrillation surgery after discussion with your surgeon, although some patients are not eligible for this - including those with previous right lung surgery; those needing other concomitant heart surgery and those who have narrowed blood vessels in the groin that preclude the introduction of the cardiopulmonary bypass tubes there.

Occasionally growths on the tricuspid valve can also cause the valve to become leaky (e.g. carcinoid disease).

Surgery is needed for tricuspid valve disease if you have the following:

Pulmonary valves are rarely affected in isolation in adults unless there is a long standing problem that was present since birth.

Where the body’s own tissues can’t be preserved or repaired to do the job that they were intended for, artificial valves are used to replace the functional one-way valve in the heart. These have evolved over time and become ever more sophisticated in their design and in the materials used to fashion them. Broadly speaking, there are two types of artificial (prosthetic) valves:

As a patient, you will need to choose between these two broad types if you are going for a valve replacement.

There are many different brands of animal valves available, but most are made from either the harvested valve leaflets of pigs (called porcine valves) OR the refashioned heart sacs of cows (called bovine valves). The animal components are treated in such a way that the cells are inert and your body will not “reject” them. They are no longer living tissue. The animal tissue is mounted onto frames of polymers and metal allows, stitched into place on a special cloth sewing
ring. Depending on the manufacturer, the valves have different shapes and characteristics. Once you have chosen that you want an animal valve, you do not need to choose the exact type: your surgeon will choose an appropriate valve for you.

Mechanical valves have evolved significantly since they were first developed and are much safer and effective than they used to be. The old metal devices have been replaced by light, strong and long-lasting heat treated carbon components (pyrolitic carbon) that allows blood to glide off it easily. Nonetheless the moving mechanical parts need to be kept well lubricated