Coronary artery bypass grafting (also known as bypass surgery or “CABG”) is a treatment for coronary artery disease (ischaemic heart disease or also known as atherosclerosis) and is the most common cardiac surgical procedure in the UK and at LHCH. 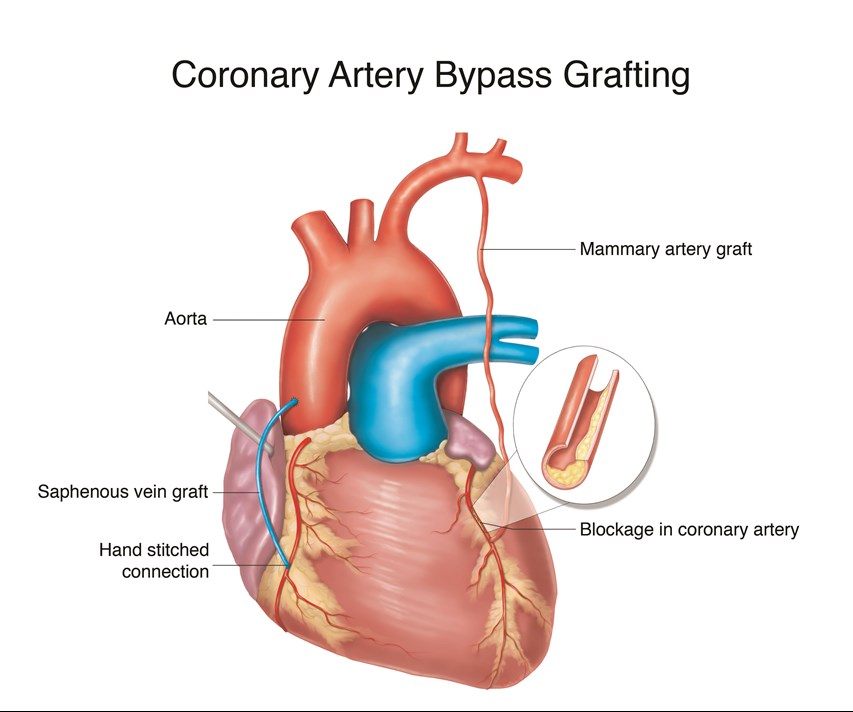 The decision to offer surgery is based on European Guidelines that have used the latest research to determine which treatments will be best for patients in the long term.

The disease in the coronary arteries is not taken out, but rather the blood supply to the area of muscle beyond the blockage is “bypassed”, hence the name.
Because the disease is not removed (this has been tried previously and causes too much damage), it is important that the medications used to prevent
further progression of atherosclerosis continue to be taken lifelong.

Surgery is needed for coronary artery disease if you have the following:

In order to connect the blood vessels that have been harvested for the bypass to the coronary arteries, which are usually around 1.5 - 2.0mm in diameter, the area being stitched to must be still and clear of bleeding without causing any damage to the heart.

There are two ways of achieving this:

For the vast majority of patients, these two techniques are no different. They are different means of achieving the same important goal: to get a better blood supply plumbed into the coronary arteries.

In some special circumstances, one technique might be preferred over the other, but research published from Liverpool Heart and Chest Hospital shows that in most cases, the two techniques are equivalent in the long and short term - as long as the surgeons who are doing the operations do their preferred technique the majority of the time. Our unit has one of the biggest and longest research studies that shows our worldwide expertise in both techniques.

If you fall into the rare group of patients who cannot have one or the other method for whatever reason (e.g. if your heart is too weak to beat by itself whilst being operated on; or if your blood vessels are too diseased to tolerate the pipes that are used for cardiopulmonary bypass) then you will be referred to a surgeon with the appropriate experience.

Surgeons with a predominantly off-pump (beating heart) practice at Liverpool Heart and Chest include:

The choice of which blood vessels to use for coronary artery bypass grafting (called “conduits”) are practically limited to three main groups:

Other blood vessels can be used, but in the majority of patients these are the main options. Each has its advantages and disadvantages, and your surgeon will discuss with you the options available.

There is some debate about what the best form of treatment for coronary artery disease is. Some people believe that arteries (rather than veins) should be used to replace the work of diseased arteries. There is some evidence to support the idea that arteries used to perform the bypass may last longer, but the evidence is not complete and doesn’t answer all the questions. Veins have been used for a very long time and advances in medicines and the techniques of surgery have meant that they are approaching the long-term quality of arteries in many cases.

The internal mammary arteries Blood vessels that come off branches near the aorta sit behind and to the side of the breastbone. The left internal mammary is the most important bypass graft that can be offered - when it is plumbed into the main blood vessel on the front of the heart, the left anterior descending artery, it is the main reason that CABG prolongs life as it tends to work reliably for a very long time. It sits in a convenient position to reach the heart without having to detach it from its source.

There is a right internal mammary artery, but it sits a little further away from the major arteries and therefore sometimes needs to be disconnected and
plumbed in elsewhere to be long enough.

Using both of the mammary arteries may provide a small advantage to the long term outcome, but removing the blood supply from both sides of the breastbone can make it unstable and slow to heal. Although problems with this are rare, they can be devastating if they occur and this method is
therefore especially avoided if there are risks of poor wound healing (such as smoking, COPD, diabetes, steroid use etc).

This is the most commonly used conduit for performing CABG worldwide. It comes from the inner leg, anywhere between the thigh and the ankle. Any areas with varicose veins, which are weak points in the vein wall, cannot be used. The main advantage of veins is that they are plentiful, can be taken with relatively little impact on the circulation in the leg as there are plenty of alternative routes for the blood to go, and have been used for a long time with good results.

Each forearm has a dual circulation to the hand: the radial and the ulnar arteries. As long as the ulnar artery has enough flow to supply the hand (tested using a simple clinical manoeuvre called the Allen test), the radial artery can be used. It is shorter than the other conduits, but has a good patency (high rates of  staying open after a long time) as long as the bypass graft itself has a good flow through it. It is a muscular vessel and can easily go into spasm, which would
restrict its flow so cannot be used in all situations.

If arteries alone are being used, which are typically shorter than veins, the configuration of the grafts must be organised in such a way that they will all reach. This sometimes involves having one artery conduit supplying more than one coronary artery.

If there is a lot of calcium deposits in the aorta or if blood vessels (conduits) to do the bypass grafts are scarce, it is sometimes possible or necessary to undertake surgery without touching the aorta. This involves mounting all the bypass grafts on the mammary artery for the inflow of blood, rather than attaching them to the larger, higher flowing aorta.

This technique may reduce the risks of stroke by minimising the amount of debris that is showered out of the aorta when it is clamped or cut, but it relies on a single vessel to supply the whole heart with blood. 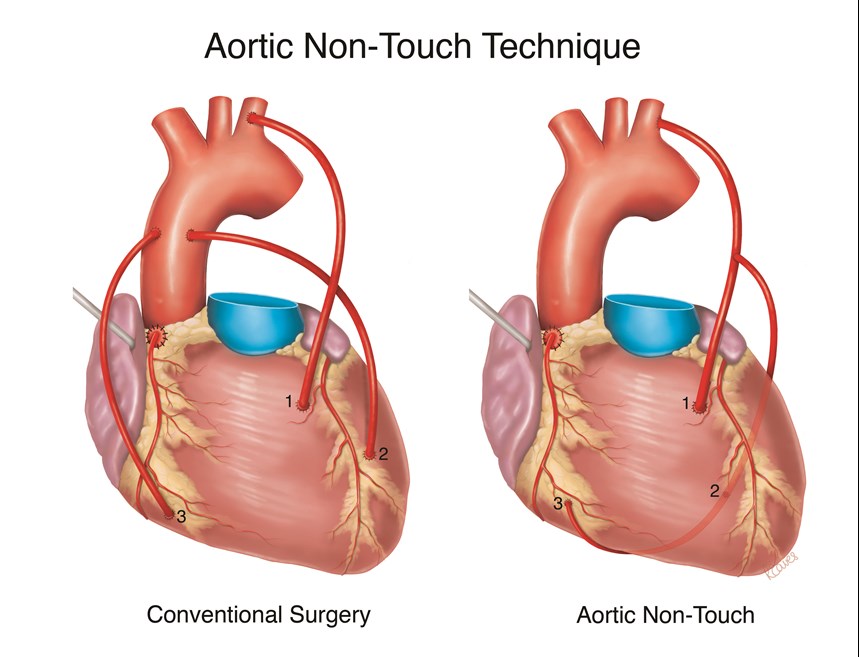 The long saphenous vein can be up to 85cm long and if it is required from both legs, these are some of the longest incisions that can be made in any form of surgery. Ways to reduce the impact of this have been in development for a long time, but the initial attempts at performing minimally invasive vein harvest tended to take a long time and were very difficult. As a result, the early results of these forms of surgery suggested that the vein was damaged significantly at the time of harvesting and was not of a good enough quality to use as coronary artery bypass grafts.

Developments in the technique - using cameras and specially designed long instruments - have improved the technique and it is now used as the main method of vein harvest in the United States. This is called Endoscopic Vein Harvest (EVH).

Initial results, however, were still unclear as to whether the quality of the vein harvested this way was as good as conventional open harvest and in 2011, the National Institute for Clinical Excellence (NICE) suggested that EVH was used with caution. More recently NICE re-examined the evidence and agreed that EVH was probably safe to use. The evidence is still lacking and it is not clear if the compromise for a smaller wound is reduced long-term success of the bypass  grafts.

Liverpool Heart and Chest Hospital does not currently offer EVH but is exploring the idea of offering this service to our patients.