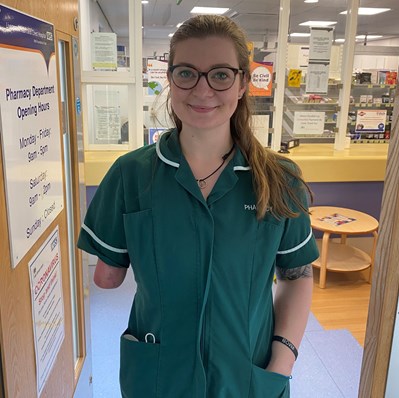 However, 26-year-old Rebecca Slater from south Liverpool is not just a remarkable athlete - crowned the World’s Strongest Disabled Woman at the WSDM competition in Iceland, in November 2021 – she is also an integral member of the Pharmacy Team at Liverpool Heart and Chest Hospital.

Having worked full-time at LHCH for 2½ years as a qualified Pharmacy Technician, Rebecca is currently studying for her Accredited Checking Pharmacy Technician qualification, in between strongman training six times per week and playing for Great Britain’s Sitting Volleyball team.

Rebecca said: “I love my work as much as I love my sport. So yes, things are busy, but if you want it enough, you make it work. I was given a second chance and I’m determined to live life to the full.”

And making every day count has been something especially close to Rebecca’s heart, since her life changed in January 2017 in a road traffic accident.

She said: "I ended up hitting black ice on the M6 and lost control of the vehicle, hit the central reservation and rolled.

"I was very lucky in the sense that in the car behind me was an off-duty nurse, and behind her were two off duty fire fighters. They secured the scene and looked after me until the emergency services came."

Rebecca was taken to the Royal Preston Hospital where surgeons fought to repair the damage to her arm but unfortunately the surgery was unsuccessful. Rebecca’s right ankle sustained major fractures which has required multiple surgeries over the past five years and her having to re-learn how to walk.

She said: “I was a month away from my army selection date. At the time, I thought my life was over and didn't know if I could do any sport again or get back to work. There was so much going on that I couldn’t think about the bigger picture or the future otherwise it would’ve overwhelmed me, so I just had to take it one step at a time."

Through grit and determination, and with the support of family and friends, Rebecca worked hard to rebuild her strength and resilience. At the same time, a friend introduced her to a new sport, which soon turned into a passion and in which she began to excel.

Having only taken up strongman training and competitions last summer, Rebecca said she can’t quite believe the progress she’s made, breaking three world records on her way to becoming the World’s Strongest Disabled Woman.

"I’m not sure that it’s sunk in, even now! One minute you're focused on training and competing with friends and then you get a trophy and you think, ‘Did I just do that?’”

“It's almost like I’m watching someone else, but I know there’s still much more to come. More competitions to win; more atlas stones and weights to lift; more trucks to pull; and more world records to break."

Now Rebecca has her sights set on Liverpool’s Strongest in May, this summer’s Worlds in Canada... and continuing her pharmacy career at LHCH.