Cycling the ‘virtual’ compass points of Britain to say ‘thanks’

A cyclist from Crewe is riding to the furthest four compass points of mainland Britain, to say ‘thank you’ for the exceptional hospital care that his wife has received for many years. 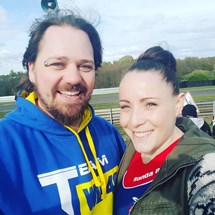 Stephen Kay, 37, completed the ‘Furthest Points’ challenge by motorbike over five days in July 2010, but decided he wanted to test his fitness and endurance further, by revisiting the epic 2500 mile journey – but completing it virtually.

The Operations Manager for Network Rail, said: “I’m attempting to reach all four compass points in 125days, by cycling 20miles every day using the exercise bike in my living room.

“Although originally I’d wanted to cycle the route physically, I realised that I wouldn’t be able to take that amount of time off work, so I looked to see if there was a virtual route planner – and there was.

Stephen, who started out on his solo virtual journey on 1st March, said his wife Sarah has been the inspiration behind the challenge.

He said: “Sarah has cystic fibrosis and has been treated by the fantastic team at Liverpool Heart and Chest Hospital for the past 20 years – and they’ve been a big part of our lives. She’s had a couple of major operations at the hospital and has also spent time in the high dependency unit connected with her cystic fibrosis treatment.

“Sarah has always received the highest standard of care at LHCH and she has such a strong bond with all the team, and they do everything to keep her as healthy and as strong as possible.

“I’ve wanted to raise money and support the LHCH Charity for a while but I wasn’t sure what to do. Due to covid and supporting Sarah, it wasn’t going to be possible to travel and spend time away from home – so this was the next best thing I could think of! It’s also returning to the route I first completed 11 years ago, and when I first met my wife-to-be during some fundraising.

“This just feels right – recreating a challenge from when we first met and supporting a cause so close to our hearts!”

Stephen is posting daily updates and a journey tracker to chart his progress, and says he hopes to complete all 2500 miles by mid-July.