Golfer back in the swing 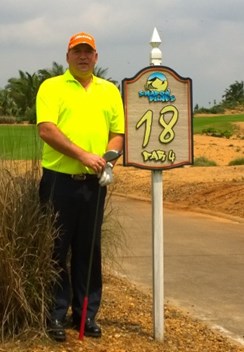 When keen amateur golfer John Charlton started to feel unwell, he feared something serious and wondered when he would next pick up his clubs.

Yet just eight days after undergoing major surgery at Liverpool Heart and Chest Hospital (LHCH), John was back on course to tee off and put his newly mended heart to the test.

The 55 year old from Cheshire, said: “I’d not had a day off work in 30 years, but I suddenly started to experience severe headaches, night sweats and my appetite disappeared.

"For the first time ever I was forced to pull out of a couple of golf competitions because I felt so unwell and I knew I needed to get myself checked out.”

It was soon discovered that as a result of an untreated wobbly tooth, a bacterial infection (streptococcus b) had entered John’s blood stream and had subsequently caused damage (endocarditis) to the mitral heart valve.

After three weeks of intravenous treatment and tests and a further week of medication and rest at home, John knew that he needed to undergo surgery to repair his damaged mitral heart valve.

It was then that he was referred to LHCH, the specialist heart and chest hospital, for a minimally invasive mitral valve repair procedure. Thanks to this technique, an alternative to open chest surgery, he was able to return to the golf course just eight days later.

Paul Modi, consultant cardiac surgeon at Liverpool Heart and Chest Hospital, said: “The traditional approach to repairing a mitral valve involves opening the front of the chest and is very invasive requiring a 2-3 month recovery period. Clearly, John would not have recovered in time for his numerous golf competitions with this procedure and would also have had a visible scar on the front of his chest.

“However this newer technique uses a small incision on the right side of the chest to give access to the heart and a high-definition video camera is then used to guide the procedure inside.”

He added: “To know that John was back playing competitive golf just over a week after the procedure was amazing and the speed of his return to normal activities is an example of what can be achieved with these keyhole heart surgery techniques'

Discharged from hospital four days after his procedure, John, who plays off a 7-handicap, was back on the fairway to play nine holes just four days later.

He added: “Since the operation I’ve felt fitter and stronger than ever and I’ve been able to play in amateur competitions at home as well as overseas. In fact, just three weeks after the operation I played 36 holes in one day around North Shore Golf Course in Blackpool – and I didn’t finish last!”

“I’m just so grateful for the care and expertise of Mr Modi and the whole hospital team. My life has been transformed and I’ve been given the chance to continue playing the sport I love.

“In future, I certainly won’t be avoiding my dentist!”