Liverpool Heart and Chest Hospital (LHCH) has been selected as part of apilot group of specialist heart centres across Europe to pioneer a newly approved leadless pacemaker.

It has become the first hospital in the North West and only the fourth centre in the UK to trial the new device. 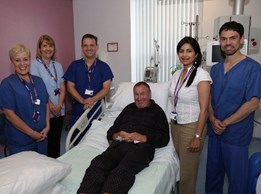 The 1.75g Medtronic device, measuring just 7mm x 26mm, and one-tenth the size of a traditional pacemaker, recently gained CE Mark approval from European regulators and is now set to be implanted into 780 patients from 50 clinical centres as part of an on-going global trial.

LHCH is at the forefront of pacemaker research and is one of Europe’s busiest pacemaker implanting centres, as well as being the largest single site specialist heart and chest hospital in the country.

LHCH Consultant Cardiologists, Dr Archie Rao and Dr Mark Hall, who performed the first of its innovative new procedures, said this was a ‘breakthrough in heart rhythm management’.

Dr Rao said: “This is a real advance in pacemaker technology, because the absence of leads should hopefully limit the associated complications that can sometime arise during implantation and thereafter.”

Dr Hall added: “Having the pacemaker entirely within the heart means no scar and no visible pacemaker under the skin. A lot of patients will prefer this. It may also mean that there is a lower risk of infection being transmitted into the heart as there is no risk of spread from the pacemaker pocket.”

Traditional pacemakers are inserted under the skin and connected to the heart by a lead which is placed in the heart via a vein. The lead carries electrical signals to correct slow or irregular heartbeats, but they can require replacement due to broken or dislodged wires.

The new device can be implanted directly in the heart and delivers electrical impulses from an electrode, removing the need for a lead.

The device, suitable for selected patients with bradycardia, is delivered via a catheter from the groin and sits within the lower right chamber of the heart (right ventricle).

Commenting on the care he received from the team who implanted his new device, 73 year old Thomas Nesbitt from Vauxhall said: “All the doctors, cardiac physiologists and nurses who looked after me have been wonderful. I couldn’t have wished for better care.”